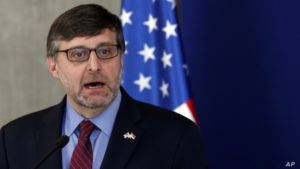 In an interview with VOA on Wednesday, Palmer said the U.S. is hopeful that the new Kosovo government is “one that’s prepared to suspend the tariffs that are an obstacle to the resumption of the dialogue process.”

He urged Kosovo to “take control of its own destiny” and “recognize that its priority is a deal with Serbia on normalization, and suspending the tariffs is part of that.” Palmer said the U.S. is hopeful that Serbia will then respond with suspending the de-recognition campaign against Kosovo.

Talks between the two nations have been put on pause since last year over Kosovo’s decision to impose a 100% tax on imported goods from Serbia.

Kosovo Prime Minister Ramush Haradinaj abruptly resigned in July after being summoned as a suspect before a war crimes tribunal in The Hague. Kosovo will hold a snap election Oct. 6 following his resignation.

The following are excerpts of the interview:

VOA: Good afternoon, Special Envoy Palmer, thank you very much for talking to Voice of America.

Palmer: Thanks for having me on your show.

VOA: What are the policy priorities in your new role? Given this is a new position created under the current administration, is it an increase of the U.S. interests and commitments to the Western Balkans?

So I look at my role as being really in position to help the countries of the Western Balkans fulfill their aspirations for European and Euro Atlantic Integration.

We’re hopeful that that begins with North Macedonia and Albania being given the opportunity to open successful negotiations with the European Union.

We (would) then like to see Serbia and Kosovo return to the negotiating table and reach an agreement on normalizing their relationship, and of course we’d like to see Bosnia-Herzegovina continue the reform process and move closer on its European and Euro-Atlantic path as well.

It’s a big agenda. There’s a lot of work to do, but I’m committed to staying in close partnership with the region and helping those countries.

VOA: As you mentioned, getting Kosovo and Serbia to restart the talk is one of the priorities. How?

Palmer: Well I think the first thing that we need to do is wait until Kosovo has its elections on Oct. 6. They’ll then be in a process of government formation.

The United States will be with them, together, to every step of this process.

But Kosovo needs to take control of its own destiny.

VOA: What is your expectation of the October 6 election?

Palmer: Well, it’s really up to the people of Kosovo.

But whatever political party emerges in the polls to be in a position to try and put together a coalition.

We hope that that party will move quickly toward government formation and toward putting together a coalition committed to re-engage in the dialogue process, in serious fashion.

VOA: The sticking points seem to be one, Kosovo’s tariffs against Serbia imports; and two, Serbia’s diplomatic campaign to block Kosovo. What will the U.S. do about it? What are the possible solutions?

Palmer: Well, what we’d like to see is we’d like to see the next Kosovo government recognize that its priority is a deal with Serbia on normalization, and suspending the tariffs is part of that.

We’re hopeful that Serbia will then respond with some incentives on its part and that would include potentially suspending the de-recognition campaign against Kosovo.

And with that as a basis: tariff suspension and termination of the de-recognition campaign, the parties can go back to the negotiating table in a positive atmosphere, with an eye toward getting to an agreement.

VOA: Would you renew your push, such as a joint letter from you and the White House National Security Council, urging Kosovo to remove the 100% tariffs, now that [Special Presidential Envoy for Hostage Affairs at the State Department Robert] O’Brien will be at the NSC?

Palmer: Sure. When I speak on behalf of the U.S. government, I’m not simply speaking on behalf of the State Department. As a special representative, I will be presenting positions of the United States that includes the National Security Council, which includes the office of the secretary of defense. And we speak as the American government with a single voice, with a single policy.

So when I go to Kosovo, when I meet with Kosovo officials, I speak on behalf of the United States — that presupposes the entire American government.

VOA: If the stagnation continues, would it have a negative impact on the U.S. support to help Kosovo and Serbia integration into the Western community?

We can’t do this by ourselves.

The parties themselves have to be leading the separation. We want a solution that is locally owned, that is durable and salable on both sides. One that the United States and others in the European community can get behind.

We’re partners with them in this process. They’re the ones that need to be (inaudible).

VOA: If I may, I would like to pivot to China’s role. As China is expanding its Belt and Road Initiative, some analysts are saying the Chinese investments in the Western Balkans are gaining momentum. Is it a negative when you are advocating for the U.S. policy priorities? What is its implication to the U.S. relations with the region?

Palmer: We understand that the countries of the Western Balkans are going to make the best deal that they can for themselves and their publics as they look to develop big infrastructure priorities. This is normal and would be appropriate.

What we are doing is trying to ensure that there is a level playing field so that American companies, Western companies are able to compete fairly for these opportunities as they arise. And we are encouraging the governments in the Western Balkans to consider broadly whether some of these deals with China are in their best interests.

We’ve certainly seen in other cases that are involved in the Belt and Road — the kind of predatory debt approach to these programs where China’s upfront number will be very appealing to the government in question, but the maintenance costs, the lack of job creation by the Chinese brings to the projects; most importantly, the debts that affect the ability of these countries to maintain the capital goods they acquire, really create long-term costs and the consequences that they haven’t thought through as carefully as they might be.

So there are security considerations. There are financial considerations and there are issues of the broader relationship with these countries would like to establish with multinational corporations that need to be factored into that decision.

VOA: As Secretary of State (Mike) Pompeo frequently tells allies the risks of using Huawei in the build out of 5G, Serbia is intensifying its cooperation with Huawei. How do you explain to countries such as Serbia, which might see the Chinese equipment and financial packages are the most attractive?

Palmer: Here again, what we’re asking people to do is consider the totality of what it is that there is certainly something like telecoms infrastructure, is it a matter of national security as much as it is a financial investment on the part of governments in question?

And do they really want to be engaged in doing business with a company that has demonstrated that it is not secure and we are encouraging Serbia and other countries in the Western Balkans to make sure that they prioritize the security of their networks in addition to prioritizing the attractiveness of the financial picture that may be the upfront.

VOA: Albania. There are many critics against current prime minister of becoming more autocratic. Is the U.S. concerned of the Socialist majority? What is your take of current political situation in Albania?

Palmer: Sure. What we would like to see is the current political impasse in Albania resolved.

The United States doesn’t pick winners and losers in the (local politics), anywhere, particularly in the Western Balkans where I’m trying to do my job.

We work with the governments that are elevated through democratic elections. We understand the desires on the part of the opposition to see reforms implemented and we support the goal of course.

There are very specific recommendations that the OSCE has made about electoral reform in Albania. We would like to see a dialogue between the government and the opposition on those reforms. And when that agreement is reached, the next elections to be conducted on that basis.

In the meantime, it’s important that Albania get a constitutional court in place so that court to adjudicate on some of the (inaudible) that would rise to that level from the political sphere.

The people of Albania can rely on friendship and partnership with the United States. Our allies, our partners are Albania and the Albanian people. Politics is politics, but the relationship between the United States and Albania is strong.

Palmer: Sure. We’re very hopeful that North Macedonia will get the opening of the accession negotiations following the European Council meeting on Oct. 16.

We believe that the government in North Macedonia has cleared that bar many times over. And in fact the European Commission has recommended the opening of the accession negotiations with Skopje for the last nine or 10 years in a row. So we’ve made that position clear to our European partners. We think that would be tremendously helpful.

North Macedonia, of course, could help its own cause by continuing to pursue the reform agenda to implement the new law on the special prosecutor’s office.

There are consultations negotiations on that issue in Skopje that are ongoing. We would like to partner with the government in North Macedonia in support of the reform agenda. We’d like to help that country move forward.

We’re also hopeful that North Macedonia will move forward quickly on the NATO track and that we can look to bringing North Macedonia in as the 30th member of NATO. Ideally as early as December. 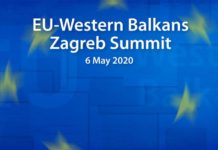 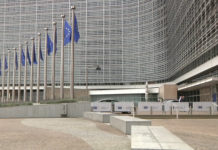 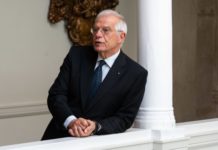 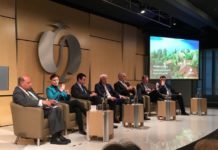 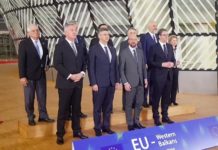 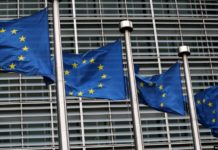